Helmut Newton had worked for more then a year in the Studio of German Photographer Yva between 1937 and 1938. She was a glamorous Fashion and Portrait Photographer, who got deported and murdered by the Nazis in 1942. Hotel Bogota in Berlin-Schlüterstrasse was a Residency for the Rich in Charlottenburg those days. Yva alias Else Ernestine Neuländer-Simon had her Studio there. She was like Helmut Newton alias Helmut Neustädter German Jewish. Newton was able to leave Germany in 1938. Yva had been banned from being a Photographer and closed down her Studio. She was arrested with her husband Alfred Simon, when they were preparing for leaving Germany in 1942. 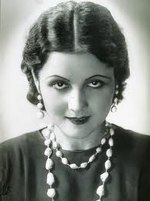 Newton had been only 17, when he worked at the Studio in Schlüterstrasse. He learned how to place the models and how to use light. Yva was a very talented Portrait Photographer as well. Incredible, that Newton was blamed by German Feminists to be a Sexist and even a Fascist for some time.

The Video shows Newton’s Photographs “Coco Chanel and dog Marta, “Love in the Office” and “Andy Warhol”. At the Hotel Bogota in Berlin Schlüterstrasse the Studio of Yva is dedicated to her memory. Although most of the Photographs are lost there is a portrait of her, a shot of Yva working and three of her Fashion Photographs. A symbolic stone is implemented in the pavement in front of her house in Schlüterstrasse. Passing by you are stumbling over it and many people start reading.

Helmut Newton’s famous Photograph “Self-portrait with model and June” shows the artist working. Portraits of Judy Foster, Isabella Rossellini and David Lynch and of Linda Evangelista mark an important part of the History of Fashion and Art Photography.

Helmut Newton died in 2004 and was buried in Berlin, the Helmut Newton
Foundation is running a museum close to Bahnhof Zoo. A must to see.