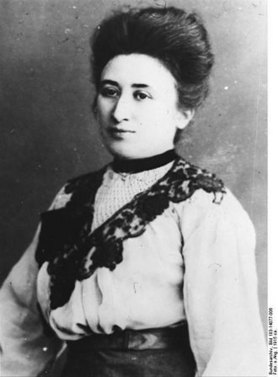 Rosa Luxemburg  was a founding member of the German Communist Party. Parts of the so called “Freekorps”- units killed her and her Comrade Karl Liebknecht on the 15th of January 1919. They held them responsible for prior riots following a general strike in Berlin.

Liebknecht and Luxemburg were part of a minority of people critisising the massacre of Armenians durnig the first world war and pleeding for international socialism and standards of human rights.

The Freekorps units were mainly consisting of retired soldiers and people with antirepublican political views.

Jason Lutes Graphic Novel Triology about Berlin before WW II. describes in a fictional story the clashes between Communists and the rising Nazi-movement. In the first book “Berlin city of Stones” the depression and anger in the workers movement after the murder of Rosa Luxemburg and Karl Liebknecht is one main topic.

Most Germans beleived in the propaganda against the communist movement. Until today the older generation isn’t aware of the fact, that the song “There is a corps swimming in the Landwehrkanal” isn’t a nice folksong, but an awful blasphemy on Rosa Luxemburg’s death.