by Alexandru Balasescu, first appeared in Zeppelin, journal of architecture and urbanism, 2012 Beyoglu is one of the seven hills of Istanbul. It has a series of particularities that makes it well known. Historically, it hosted the non- orthodox Christians during the Byzantine times, and became after the conquest of Constantinopole the place were all non- muslims settled and strived. From the 19th century on it hosted the European Legacies in Istanbul, later to become General Consulates. This is why it was also known as the non-believers hill. 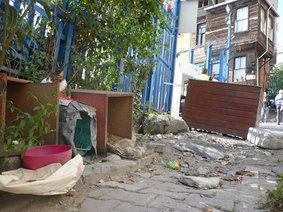 Besides the hill of arts, of foreigners (tour- ists as the Istanbulites call them, despite the length of time spent here), or of nightlife, Beyoglu is also the cats’ hill. Thousands of cats dwell on the streets, freely entering and exiting shops, restaurants, antiquaries… There is a particular and intimate relation- ship between cats and people here, revealed through two characteristics: 1. An extremely limited number of cats have necklaces claiming ownership. 2. There are specific street corners where people spontaneously intervene into the space in order to accom- modate the cats’ needs (food, shelter). I will briefly analyze the second and extrapo- late on the relationship between city’s biodiversity, space, and the idea of public and ownership.

Cat’s necessities do cover a small range: food and shelter – and while both are widely available in the interstitial urban spaces, Beyoglu inhabitants intervene in order to cover these needs in a variety of ways, from the most rudimentary to the most elabo- rate manners. Most often one can see food (sometimes bought at the local petshops) on pieces of newspapers and 5-liter plastic water recipients cut in half and filled with water. Shelters for cats can also be seen, and they are made either from reused materials, boxes installed in difficult accessible spaces or built-to-purposed wooden “condo- miniums” in which cats enjoy a leisurely life. 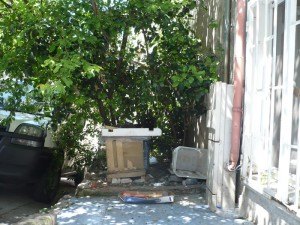 These direct interventions into the public space appear wherever the space allows, on sidewalks, at the beginning of pedestrian stairs, on small piazzas and parks. They are conspicuous without being intrusive, and provide for an even more comfortable life for the well-attended cats of Beyoglu.
It is of course no wonder that the state of the cats’ shelters reflect the state of the houses in the vicinity forming an interesting social mirror.

The absence of claim of ownership of cats allow them to freely move from public to private spaces, or privately owned public spaces (shops), creating an invisible link between those spaces and putting under lenses the question of access – from granting to securing it: which kind of bodies are allowed (or not) in different spaces?

For example, many Westerners may show disgust at the sight of an alley cat lying on the sofa of a restaurant. Health regulations (distance from the dream of sterile, secure spaces) and allergies may be the first to come to mind. However, the sight is not uncommon here.

Without having any clear regularity, the human intervention tending to cats’ life in Beyoglu transforms the public space and the rules of its utilization. It speaks in an interesting manner about the relationship of negotiating space within the environment of the city characterized by biodiversity. 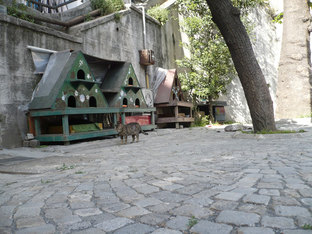 Every city has its semi-domesticated or wildlife, the biodiversity of the constructed space developing within the framework of the relationship between humans and nature. In urban spaces usually we witness a negation of biodiversity through the complete domestication of “animals of company”, the ghetto-ization of accept- able ones (in parks, green areas or zoos) and the simultaneous denial of the right to living to all others that may fall in between these categories. For example in Bucharest an entire campaign was in place to chase away the crows that populate Cismigiu, the central garden of the city.

In the particular case of Beyoglu’s cats we witness a continuous negotiation of the border nature/culture that has its material expression in the built structures for cats. This points out to a possible different understanding of the notion of public by its extension towards the realm of non-human biological life. We may imagine that these interventions in the public space dedicated to a different public, or better said to the relationship between human citizens and their non-human co-habitants. Future planned introduction of animal shelters within the public space would be a path of recognition by design of rights of citizenship and their extension to the animal world. It would mean in fact the recognition of cities’ ecosystems, rather that of the city as gener- ator of separation nature/culture.