“Question : If there was to be a third episode, what would you want to see it in? More of the same, something new, less interviews, more interviews? Please email suggestions to contact@crackthesurface.com”

Episode II takes a look at a small collection of explorers from across the pond in America and Canada, focusing on their participation and experiences within their local and global exploring community.

Filmed over six weeks resulting in over 1.5TB of raw footage from locations such as New York, Indianapolis, Chicago, Las Vegas, Minneapolis and Montreal. 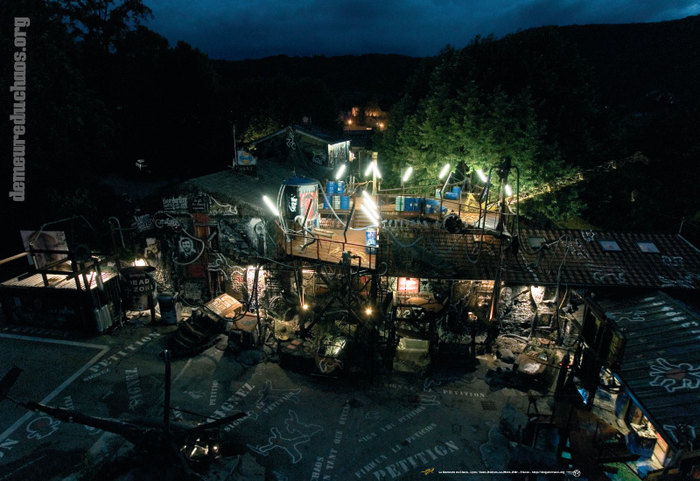 The Abode of Chaos (French: Demeure du Chaos) is a Museum of Contemporary Art located in Saint-Romain-au-Mont-d’Or, a small town in the vicinity of Lyon, France. It is a living sum of more than 2,500 artworks, performed by many different artists and Thierry Ehrmann, CEO of Groupe Serveur.

The artwork is based around the transformation of Ehrmann’s 17th century home into a replica war zone, at contrast with the peaceful village in which it is located. The Abode of Chaos has been the subject of an on-going law suit from the local mayor’s office. Ehrmann has been ordered to pay a fine for unauthorised construction under town planning laws but has not been ordered to restore his home to its original condition. Today he is condemned by the Court of Cassation, France’s highest court : he has to recondition his outer walls or pay a compensation.

The university was established following an agreement signed with the presence of President François Mitterrand of France and President Turgut Özal of Turkey 1992.

The main administrative building of Galatasaray University burnt on the 22ed of January 2013. It is unusable and in a very bad condition.

The reasons of the Fire are still investigated. On Social media people were immediately speculating about malicious arson. The government recently decided about the possibilities to open public buildings for commercial usage in Tourism. But that doesn’t really prove that anyone wants to destroy a valuable 19th century buildung on the banks of the Bosphorus, like the parking placa mafia in Güneri İçoğlus Comic “Gönül adam Yekta”.

Yekta: “The Parking Place doesn’t sleep. How many wooden houses are gone until now li,ke this?”

This post has been updated. Roee was released at around 4 a.m. local time.

I am writing this from a Turkish police center in Ceylanpinar. Located in eastern Turkey along the border with Syria, it is in Urfa province and it’s population is mostly ethnic Kurdish.

My television crew and I were filming along the border about the Kurdish divide and Turkish fears in Ankara about a power vacuum in northern Syria.

Two secret police spotted us filming from a rooftop the Syrian town – in full Kurdish control, meaning no Syrian troops or rebel fighters in sight.

It is unclear to me if we will be just detained and then let go, or actually arrested. (I would imagine the latter would be preposterous because we didn’t really do anything, and also because today the U.S. Secretary of State Hillary Clinton is visiting in Istanbul and meeting with the country’s top leaders. It would be rather untimely to have Turkish police arrest an American journalist trying to cover from Turkish soil the conflict in neighboring Syria. Especially just as Washington pledges $5.5 million in “non-lethal aide” to help the rebels win their war against Syrian President Bashar Assad, a cause which aligns with Turkish interests.)

I guess it can’t be all that bad, since the police are letting me write this post on my iPhone while they try to figure out why I also have an Israeli passport. And while my detention is annoying, if for no other reason than losing valuable filming daylight, it does highlight Turkish edginess in this part of the country. Ankara fears that Kurds in eastern Turkey may be emboldened by chaos in northern Syria, political autonomy for Kurds in northern Iraq, and anti-Turkey sentiment – backed by Tehran, in northwest Iran. These are all ethnically Kurdish areas which separatists envision as a future, united state.

In recent weeks, Turkish troops killed more than one hundred Kurdish fighters in eastern Turkey, who they argued are being armed and backed by Kurdish terrorists across the border in Iraq. No doubt the offensive was also meant to send a message to Kurds in northern Syria to think twice before exciting their brethren across the border.

Oh, time to go back in to the Police Chief’s office.

Arthouse Bethanien at the Mariannenplatz in Berlin-Kreuzberg is the result of the
Occupy movement of the 197oth and 198oth in Berlin.

Georg von Rauch was a radical anarchist and part of the Occupy-movement. He got
shot on the 4th of December 1971 at the Eisenacher Strasse in Berlin by the Police
trying to arrest him.

1970 the hospital Bethanien was closed, a demolition was prevented by the
uprising of the neighboorhood. The “Martha-Maria-House” had been the hostel for
the hospitals nurses. It got invaded by the occupy movement in 1971 an was
renamed into “Georg-Rauch-Haus”.

The public protest resulted into the “Culture-and Youth-Project” in the
Rauch-Haus. The Berlin Senate decided one year later for an Arthouse in the
main building of the Bethanien Complex.

“Ton Steine Scherben” was the most listened Occupy Band. Did you know, that Claudia Roth was there PR Manager in those days? Singer Rio Reiser composed the Rauch-House-Song. This is the first strophe.

“The Mariannen Square, was blue, we won’t get it like that again. So much Police was around.
Mensch Meier had to cry, probably because of the tear gas. He was asking someone, what’s up here? Do we celebrate something? The guy answered. Something like this. We do occupy the Bethanien right now!
Mensch Meier said, you even got late, it was empty the whole time. Life would be so beautiful without the police. The policechief was shouting: do empty the Maraiannen Square immediately. My pushstick guards need space to beat you all up. The people in the occupied house shouted: we won’t go out.Ypu won’t get us out from here. This is our house. Why don’t you through out Schmidt, Press and Bosch (building tycoons from Berlin in those days) out of Kreuzberg?”

The refrain: “this is our house” was the most popular slogan of the occupy movement in Germany. After Berlin in all the bigger cities empty houses sentenced do demolition were occupied. The normal population started to feel empathy. Police forces and the government had to compromiese. Later on the first free living communities were built in these houses. Bethanien is an Arthouse eversince.